Because of the National Youth Day last Thursday, we had a long weekend in South Africa. We wanted to make a use of that and drive somewhere we wouldn´t be able to go on a normal weekend. So we took our map and looked for a nice place at the coast. I didn´t want to go too far inland because of the freezing nights we have here at the moment which are far worse than the ones at the coast. Of course you can still have hot days but during the nights the temperatures can easily drop to a little above zero degrees. Without a proper heating in the flat such nights are way to cold for me. In the end we decided to got to the Hoop, a Nature Reserve close to Cape Town and directly at the Indian Ocean. Since nobody seems to know this place or let alone has been there we booked only to nights – just in case we wouldn´t like it there. We started at nine o´clock in the morning of the 16th of June – a little to late as we know now. It took as over seven hours to go there which would be fine. But at halftime our car started to make strange noises that sounded like a “flop…flop…flop…flop”. We were able to locate the origin of the sound directly under our feet. We began to get an unpleasant feeling. Still no license plate on the car but already the first fault. Could that really be? We wondered for quite a while since there are no regular stops on the motorway like in Germany. Once in a while a gas station yes, but that’s it. At least we found a parking lot in front of a closed bungee jumping bridge and figured out that a big plastic piece (I still have no clue what it´s function is) got out of place. So my husband tried to fix it with ducked tape, a thing you should always with you. Photographers already know that this is a lifesaver! After that we tried to drive as careful as possible and arrived at the park just in time for the sunset.

But what a place! I don´t understand why it wasn´t crowded there. There is a 17 km long Vlei with such a productive ecosystem that you are able to see 260 bird species there. I´m not a birder but it was quite impressive having hundreds of birds flying around your place in the morning. I spotted flamingos and pelicans but my personal highlight was a Giant Kingfisher, fishing next to a small boathouse. It was so focused on catching a nice fish it didn´t even bother that I was trying to get close to it. Even fish eagles are nesting there. If you are not into birds, they also have a lot of game there. There are no fences or locked areas, so you and all the animals can walk around. There are also many hiking trails around the Vlei or between the fynbos. If you are there at the right time of the year hundreds of proteases are in flower which is very beautiful. We saw many antelopes, baboons, ostriches and cape rabbits. In the evening even a few bonteboks picked the grass in front of our little house to rest. Only one animal did hide – the snakes and to be honest I´m glad they did. I wasn´t really keen on meeting them. If you are neither in birds nor game than from the beginning of June up to October, there is also a good chance to spot whales. You have to take a short drive of 16 kilometers (that takes quite long because of the bad condition of the street, especially if it has rained before) and you will reach the dunes. Those dunes are the biggest I have ever seen close to the sea. Standing on top of one of those dunes you can see for miles. In one direction there is the sea and in the there are other more dunes. Nothing but dunes. It was very peaceful to sit there with the sound of the rolling waves in my ears, the smell of the salty sea in my nose and the touch of the sandy wind in my hair. It would have been enough for me to just enjoy this. But above all we were very lucky: The people living there told me that the whales haven´t arrived yet. But as I sat there, at first I saw same black spots in the sea. And they moved closer to the beach. I could make out same water fountains and then even some tails. The very first whales of the season! And even four of them. I can not even describe how happy this made me. Now I know they are on their way to us. 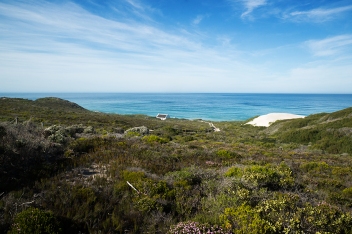 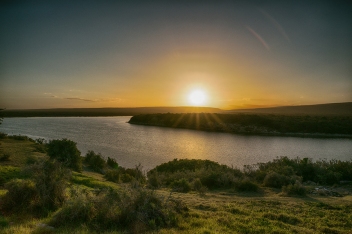